How the Red Robin and Donatos partnership came together 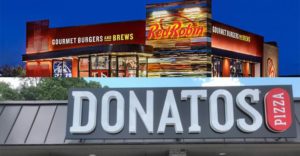 The casual dining chain under then-CEO Denny Marie Post pursued a different pizza brand three years ago before turning to Donatos, which was skittish after its experience with McDonald’s

After the founder of Donatos Pizza repurchased the chain from McDonald’s in 2003, the Ohio-based pizzeria brand – known for its edge to edge toppings – was reluctant to partner with any big corporation.

“We were very cautious about who we got involved with,” Donatos CEO Tom Krouse told Nation’s Restaurant News in a recent phone interview.

That all changed in 2018 when the family-run pizza company was approached by Red Robin Gourmet Burgers. Led by then-CEO Denny Marie Post, the Greenwood Village, Colo.-based casual dining was searching for a food offering that would complement its burger-centric menu.

“As we looked at are overall menu, burgers are always at the heart of who we are. It always will be,” Jason Rusk, vice president of business innovation at Red Robin, told NRN. “But from an opportunity standpoint, pizza is very Americana just like the food that Red Robin offers. So, a category extension is something super, super interesting to us.”

By finishing what Post started, Murphy is betting that pizza will drive guest frequency and increase average check while also lifting the brand’s delivery business.

“It is certainly a game changer for us,” Murphy said when he announced the partnership at the ICR Conference in Orlando.

The casual dining brand dabbled with pizza in the 1990s, then retreated.

In 2017, the brand decided to get back into the pizza game by finding a partner that would give Red Robin instant credibility with consumers.

They hooked up with Round Table Pizza for a one-store test in Gresham, Ore. near Portland.

During the pilot, Red Robin quickly learned what all craft pizza makers know.

Making pizza dough from scratch is tough. Batches, which required proofing, were not consistent.

“We learned a lot, specifically around operational complexity and how [pizza] needs to fit in and be executed at our restaurants in the timeframe that our burgers are today so that it can be consistent,” Rusk said.

Despite the challenges, Red Robin also discovered that diners liked having pizza as a menu option.

“Consumers gave us permission to be able to do this,” Rusk said.

‘They were understandably cautious’

While the Round Table product was good, the partnership didn’t work out as the chain was undergoing leadership changes at the time.

The Columbus, Ohio-based company had all the attributes Red Robin was looking for: operational excellence and a legion of nationwide followers despite being a regional chain.

“It’s a brand that’s been around for 56 years in the Midwest that’s beloved by people,” Rusk said.

Part of the brand’s notoriety is its previous connection to McDonald’s, which owned Donatos for four years when the fast food giant was dabbling with other food categories that included Chipotle Mexican Grill and Boston Market.

McDonald’s grew Donatos too quickly, prompting founder Jim Grote and his daughter to buy back the company in 2003. Under McDonald’s, Donatos reached 200 units, before downsizing to 182 when the Grote family stepped in.

That experience left the family-run company skittish about working with another big brand.

“Having another company take control of our product is not something we take lightly,” said Krouse, a 20-year-veteran of Donatos who’s been CEO since 2010.

Post, in a recent interview with NRN, recalls the reluctance: “They were understandably cautious about it when I first approached them.” 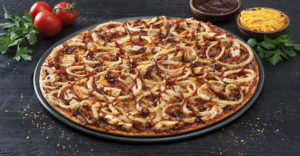 But Krouse said the two brands had mutual respect.

Not to mention, the timing was perfect for Donatos.

The brand was looking to reboot growth with a new modern prototype store.

“We were literally in the throes of how we were going to expand across the country,” Krouse said.

In summer of 2018, Red Robin began serving Donatos pizza at four restaurants near the home bases of both companies: Cleveland, Ohio and Colorado Springs, Co.

Having learned from the Round Table testing, Red Robin did not want to make the dough in-house.

That worked for Donatos, which keeps its proprietary thin-crust recipe under wraps.

To control quality, the company makes its dough at a Ohio facility and then ships fresh dough to restaurants. The brand also understands scale. It sells frozen pizza under the Sonoma Flatbread label in 8,000 grocery stores nationwide.

At Red Robin, cooks prepare each pizza with the same ingredients used by Donatos. Every aspect of the prep is identical. A large pepperoni pizza, for example, is served with 100 “edge to edge” pepperonis and cut into squares just like Donatos.

Nine pies, including a build your own option and a Whiskey River BBQ pizza developed specifically for Red Robin, are on the menu.

Though Post resigned in the spring, testing continued under interim CEO Pattye Moore, followed by Murphy.

Krouse admits that the change of leadership at the top gave him a few “more gray” hairs.

But Krouse each leader has been great to work with. “The people, from Denny to Patty to Paul, they are tremendous.”

Throughout testing, Red Robin learned that they could deliver a 10 or 14-inch pizza to guests in about 8-10 minutes. That’s the same cook time as a Red Robin burger.

“It is definitely not impacting service time. It is well engineered to execute operationally,” Rusk said.

Restaurants serving pizzas, which range in price from $8.99 to $17.49, are seeing average comparable traffic improve 3.5%. That’s a bright spot given that guest counts were down 3.1% in Red Robin’s latest quarter.

“We see our guests using [Donatos] not as a tradeoff to Red Robin burgers, but as an add-on like an appetizer,” Rusk said.

The Red Robin-Donatos partnership requires a $145,000 per restaurant investment, which includes adding a pizza oven to an underutilized area underneath the kitchen hood.

In the second year of testing, restaurants are seeing gross margins of $45,000 per year , per restaurant.

For Donatos, caution has turned to excitement.

The partnership with Red Robin gives the brand instant national exposure as it looks to expand via franchising.

“We couldn’t be luckier than to be teamed up with a culture like Red Robin,” Krouse said.

This year, Donatos expects to open 8 to 10 restaurants including three to five in new markets in Florida.

Both brands appear to be avoiding market overlap.

Red Robin restaurants adding Donatos over the next several months will be concentrated out West in California, Oregon, Washington, New Mexico, Utah and Nevada, Krouse said.

Donatos, on the other hand, is focusing its growth in the mid-Atlantic, Midwest and Southeast regions of the U.S.

Could a franchise partnership be in the works, where Red Robin developed Donatos?

“Right now we are focusing on expanding Red Robin within our current footprint and that is our main focus. Red Robin and Donatos will evaluate other opportunities in the future,” Red Robin said in a statement.

As for Post, she said she’s glad to see the pizza plan she launched three years ago come to life.

“I’m very happy to see it move forward,” she said.

2,000 calories a day is used for general nutrition advice, but calorie needs may vary. Additional nutrition information is available upon request.
*14" pizza has 17 rectangular pieces, 12" and 10" pizzas have 14 rectangular pieces, 7" and Hand Tossed pizza has 8 pieces. Create Your Own pizza calories account for crust, sauce and cheese. Salad calories do not include dressing. Total calories do not reflect customization.